My doggie Gram, Sporty, lives on a dairy farm along with my doggie Uncles, Shawn C. and Goober and my doggie Aunt, Jewels (they're my Mom's litter mates, all wire fox terriers). The farm was sold a few years ago, but hooman Great Gram, Judy, and her family still live there in the old farmhouse.


My hooman Uncle Shawn now has a calf that he says he is raisin' for food. The calf lives in a shelter behind the garage and Uncle Shawn has had him since he was born last year. Did ya know that when momma cows have their babies, they don't get ta keep 'em and nurse 'em... 'n cuddle 'em? Someone comes along and takes the babies right away and they are bottle fed until they can eat solid food. 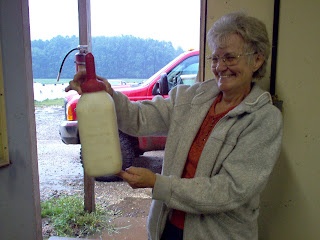 My that's a Big bottle, huh?
The cow Moms go back into the dairy-milking mix after a few days, once the colostrum is out of their milk. And the baby cows go into little huts with their own fenced yards and a hooman person bottle feeds them all their milk. Sounds like a lot of work, huh? It is. 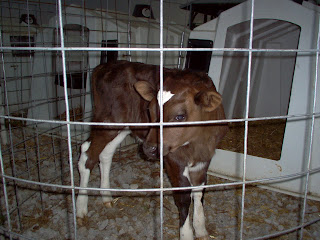 Here is what the baby huts look like....and there is a whole little city of 'em. Cute little buggers, aren't they? 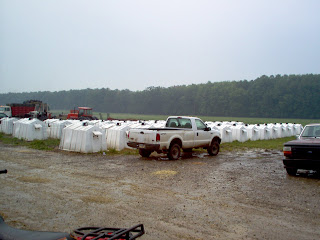 Anyway, back to Uncle Shawn and his calf. Last time we were at the farm, we got ta see Uncle Shawn's calf and his name is Goliath. Now, if yer plannin' on butcherin' yer little boy child fer food later on, do ya give 'em a name? Well, I guess he's not so little fer a boy child, now is he?

Check out the video of Goliath. He's a cutie, isn't he?

That was hooman Gram Judy callin' Goliath so he would come out ta see us.....

Don't think there are a lot of doggies out there who have a cousin that is a calf and one that will be on a dinner table in a few years. Or so Uncle Shawn says.......


Sure hope ya all enjoyed the dairy farm story and that ya all think Goliath is a pretty neat cousin ta have......we sure do.......

We just came home today after our week in the country and I am taking over the keyboard to report on some of the interesting stuff we did while we were there. We just love the country because we get to run around the big yard we have and search for all the good smells that are there. We knew the deer had been there while we were gone because they left behind lots off little piles of doo doo for us to smell. And one morning we got up and looked out the side window to find them over at our salt lick. 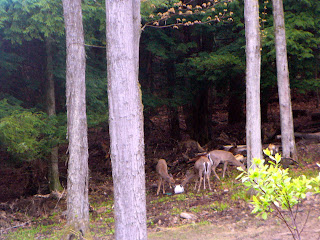 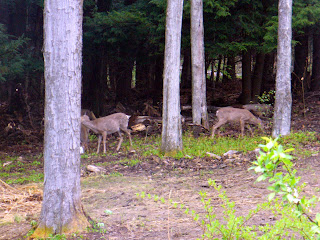 And here's a better shot of the 3 deer and the salt lick. I bet now that we are gone again, they are back there every day. 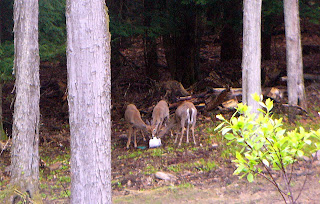 Now my Mom was really busy working on her rock gardens and when she picks up rocks to rearrange them, she sometimes sees snakes under the rocks. Mom sure is afraid of snakes but I always try to help her out by taking care of them so that they don't scare her anymore. I helped her get rid of two of them. How do I do that? When she calls me, "Snake, Asta, snake!!!!!", I come running and grab the snake and shake it and shake it and shake it. The snake usually falls apart and then I get to show it to Dewey and Toby and we all get to roll on it. Do you see the snake by my feet? He was already soundly shaken and pretty well dead and is upside down. 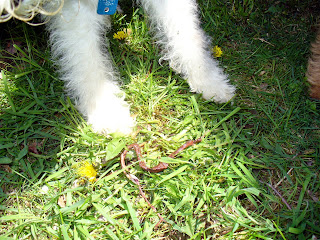 Mom picked him up on the rock so you could get a better idea of what a monster he was before I got to him with my shaking technique. That's his underside you are looking at. It's a good thing I help my Mom cause she would really be afraid to work in her garden. 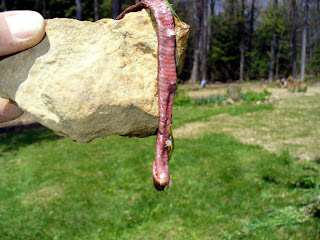 We got my Mom a little help with her mind and we have lots more to show you but that will be later on in the week.

We hope that all the Moms out there had a really great Mother's Day. I know that I did.....I spent it with my Mom and with my little boy child, Dewey. And I guess I should also mention that Toby, the red-headed step-child of mine was also around for the occasion. It is aways a great day when you spend it with family.

See you all later...