I asked ya ta remind me ta tell ya about what my Mom, Asta Marie, has been facin' lately,

So here I am ta fill ya in.

Gram 'n Pap noticed that some of my Mom's lower front teeth were loose, so they took 'er ta the vet who cleaned them, polished 'em and pulled the loose ones. The vet said that she didn't need 'em cause dogs don't use those teeth fer anythin' That was in July of 2012.

In late September, my Mom seemed ta be havin' problems with 'er stomach. She didn't want ta eat......'er tummy was hard and distended.....she followed Gram around everywhere and she was shakin' and pantin' up a storm.

Gram 'n Pap took 'er ta the vet who took X-rays, did blood work and diagnosed "Nothin'". But they gave 'er antibiotics and pain pills and about a week later, she was her old self again.

Gram had been noticin' that my Mom's leg muscles in 'er one hind leg seemed ta be really bulgin'......but she noticed this at bedtime when she was helpin' 'er get inta bed and she didn't remember ta point it out ta Pap until one night after we had been playin' ball up ta the cottage like maniacs (now that is Gram's description of our play habits.....not mine).

Gram felt not only those bulgin' muscles that night but what appeared ta be a lump.....high up in that hind leg. Gram called the vet right up and made an appointment ta have it checked out.

The vet tried ta do a needle aspiration of the lump and he did but when he looked under the microscope, he couldn't see anythin'.

He told Gram 'n Pap that it should be operated on and that he felt it was just routine surgery for what hopefully would be a fatty tumor.

The next day, October 26, 2012, my Mom got operated on and the vet called ta tell Gram that the tumor was quite large.....both between and under her leg muscles and that it went down deep too. He removed 90% of it, he said, but when it got down to the blood vessels and the nerves in that leg, he stopped and left the rest of it. 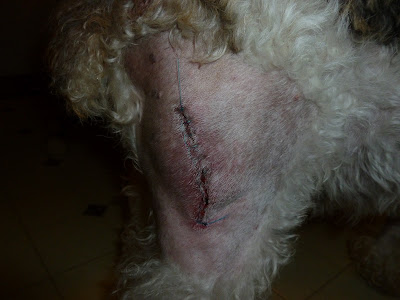 This is what my Mom looked like after the first surgery.

The tumor was sent away for a biopsy.

Two weeks later, the results came back that it was a grade 2 Fibrosarcoma, which is a cancer, and the prognosis was not good. Remember the entire tumor had not been removed. Also my Mom had a pocket of what appeared to be fluid by the incision site which is not unusual after surgery but it did not disappear.

The vet referred Gram 'n Pap ta the Pittsburgh Veterinary Specialty and Emergency Center for a consult with an Oncologist. Can ya believe that there are Oncologists fer doggies too?
Well of course there is.....cause we are even more important than the peepers.....fer sure.

Anyway Gram 'n Pap and my Mom headed down there ( this center is only about 3 miles from where we live) and the Oncologist gave them a list of options:

1. She could have radiation treatments......treatments are daily....5 days a week for 4 to 5 weeks. And every treatment requires the patient be anesthetized for each one....not a good idea.....my Mom turned 11 in October.

2. They could implant chemo beads down deep where the tumor was. These beads release the chemo only to that area where it is needed. This is a new treatment and statistics were not available for how successful they are.

3. They could perform another surgery by a board certified surgeon on staff there to remove the balance of the tumor and that may be all that is necessary. Remember there was still some left down deep in the leg by the blood vessels and nerves.

Gram 'n Pap were pretty overwhelmed by all of this and decided ta do nothin' until they could decide which option was best.

This vet said that he got the entire tumor but that there was a lot of it there when he operated. He took part of my Mom's leg muscle to make sure that he got enough and sent the tumor away fer a biopsy ta make sure the margins were good. 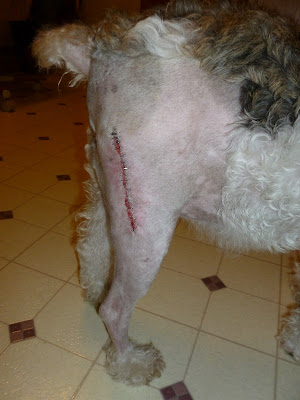 'N this is what Mom looked like after the second surgery. Look....no hair on most of 'er back end and that little tuft on 'er foot. She looked silly but the incision looked much better this time. No pocket of fluid at all.

Two weeks later, my Mom had ta go back ta have her staples removed and Gram 'n Pap got the bad news. The margins were not good down by the blood vessels and nerves. The surgeon felt that radiation would be the best course of treatment.....the chemo beads were not a good idea because of how deeply they would need to go and of course they have side affects. So does the radiation.

Gram ' Pap decided ta do nothin' and asked the vet what to expect. He said that the tumor would likely be back with a vengeance within a month. And it would grow and grow until it ruptured....or just got too big.....they would have to make a difficult decision.

Gram told him they used to give my Mom her rabies shots in that same leg. She was goin' to try to beef up my Mom's immune system and see if that helped her fight the cancer. The veterinary surgeon did not think that would help at all.

Gram searched the Internet to see what Fibrosarcoma was all about and looked for any holistic treatments for cancer. She found several sites that seemed to offer some hope. After all, my Mom, is Gram's only little girl and she really did not want ta say goodbye this soon.

She found a treatment called The Doctor Budwig's Cancer Treatment. This treatment is really fer the Peepers but some people adapted it ta doggies and had success with it. So Gram went out and bought the cottage cheese and flax oil fer the protocol that is a the cornerstone of the diet. She also bought a lot of dietary supplements and vitamins ta help boost my Mom's immune system. After all, what did she have ta lose?

Ya know ya can only believe so much of what ya read on the Internet but there are a lot of testimonials out there of doggies that were helped by this protocol.

So Gram started mixin' the protocol:
Gram did that for several weeks.....twice a day. Ya have ta be careful with this mixture cause it is high in fat and can cause ya ta have Pancreatitis . Gram only gives it once a day now and usually puts in an acidophilus pill broken up. She has had good luck with that and also sprinklin' digestive enzymes on Mom's dinner.

She also gives my Mom
All of that stuff goes inta the supper we get. Gram gives me 'n Toby some too so that we stay healthy. 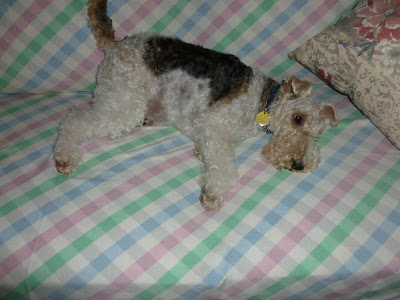 Don't I look healthy? I was restin' after a hard day of watchin' out fer vermin. It really is a hard job but I do it well. 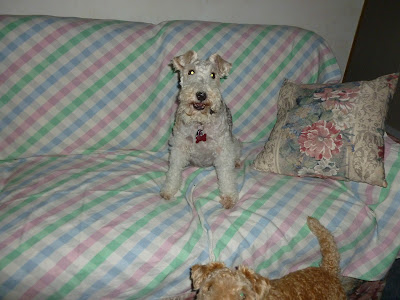 See here's my Mom lookin' pretty healthy and even smilin' a bit. She really hates ta have 'er picture taken but fer some reason she smiled fer a change. The hair has grown back again but Mom's gettin' a bit fat from that protocol.
Here we are 3 months out from the second surgery.....Gram can't feel anything growing back in that right hind leg and my Mom is doin' just fine. She still gets that protocol every morning and those vitamins and supplements every night. 'N me 'n Toby get a bit too.....we like it even better than Mom does.
So we will keep ya updated on how my Mom is doin'. If yer a doggie who has health issues, ya might want ta try a bit of that protocol. While it is the cornerstone of the Dr Budwig Cancer Diet, it is also high in Omega 3s and is a great boost ta yer immune system.
I want my Mom ta be around fer a lot more time and hopefully this will help her achieve that goal.
This is Dewey Dewster reportin' on my Mom's big health scare.
Posted by Dewey Dewster at 2:14 PM 6 comments: