Congratulations to the Pittsburgh Steelers

Hello out there all across this country and the world...

Gram takes over the blog today and tries to capture some of the pride and excitement she feels being a part of the City of Pittsburgh and part of the Steeler Nation.

Last night the Pittsburgh Steelers won Super Bowl XLIII by prevailing over the Arizona Cardinals. What a game it was !!!! While my words pale in comparison to those of professionals, I tried to describe some of the feelings I had while watching our Home Team become the victors in the Super Bowl and go on to win their 6th Super Bowl Game and Lombardi Trophy.

Six Lombardi trophies will now have a home in Pittsburgh, Pa. 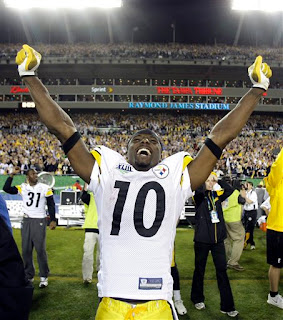 Santonio Holmes celebrates after his 4th quarter touchdown....giving the Steelers the win.

James Harrison running for 100 yards right before the halftime after intercepting a Cardinal pass.

Our Pittsburgh Steelers and the Black and Gold......

The Super Bowl on February one
In the year of two thousand nine,
Will go down in the record books,
As the Super Bowl for all time.

The Steelers fought the Cardinals,
And the Cardinals fought right back.
And no one knew the winner,
Until the final ground attack.

We take our hats off to Big Ben
And to James Harrison for his play.
His interception and hundred yard TD.
Made the fans all scream "Horray' !!!

The Cardinals played an awesome game
In the 4th quarter they pulled ahead.
With less than 3 minutes on the clock,
They thought they'd put it all to bed.

But as Coach Tomlin pointed out.
Sixty minutes make a football game.
And though it seemed the cause was lost.
In the end, the Steeler's overcame.

With only seconds ticking on the clock.
And Big Ben throwing down the field.
Santonio Holmes snagged the final pass.
And the game outcome was sealed.

He reached high in the end zone.
Toes touching to the ground.
With determined will and mighty skill.
Why, that lead just turned around.

Heads were shaking left and right.
The Steelers pulled off quite a win.
Final score Steelers 27 Cardinals 23.
Let the celebrations now begin.

With six Lombardi trophies,
We stand in speechless admiration.
Of the players and the faithful fans,
All across the Steeler nation !!!

And while we're here in Pittsburgh,
The Steeler Nation breaks the mold.
It's members span this big wide world,
To support the Black and Gold !!!

I just want to extend my congratulations to the City of Pittsburgh, to the Pittsburgh Steelers, the Rooney family and to all the fans in the Steeler Nation !!!