Hi ta all my friends,

Ya may have heard us mention and Agatha ‘n Archie talk about tryin’ ta be earthdogs….’n we've been goin’ ta earthdog practice. And ya may have seen Rudy show his earthdog skills on his blog. But ya may not know what earthdog is all about and why we even want ta be involved in it.

So Dewey Dewster has been researchin’ all about earthdog ta let ya know what we found out.

Years ago the doggie breeds of taday were bred fer a special purpose….’n small terriers and Dachshunds were bred ta help the farmers and hunters chase the vermin ta their lair and then follow them underground. These decendents of ours needed ta have the physical abilities ta fit inta the animals den and engage ‘em in their own territory but they had ta have the brains ‘n courage ta accept the challenges in goin’ underground. Cause everyone knows we doggies sure don’t live down there. It’s dark ‘n dirty ‘n sometimes pretty muddy….’n when ya invade someone else’s house…they get pretty mad ‘n testy.

So way back in 1971 (way before I was even a glimmer in my Dad’s eye....'n my Dad wasn't even a thought), groups of terrier and Dachshund lovers were tryin’ out the task of actual hunting with their dogs. But it wasn’t until 1988 that a group of “go to ground” enthusiasts assembled in California ta put together an earthdog program that the AKC could embrace.

“To ground” trials were developed with 3 different levels of hunting tests for small terriers and Dachshunds and by 1993 several clubs across the states had tested a prototype and convinced the AKC that the program would be a viable one. The title for the qualifying dogs would be “Earthdog”. And in October of 1994 the program was put into effect.

Taday, there are 3 titles that ya can strive ta compete fer….Junior Earthdog, Senior Earthdog and Master Earthdog. And today the breeds that qualify for the trials are:

Since I, Dewey Dewster, have been researchin’ this, I thought that ya had ta pass the Junior Earthdog test under 2 different clubs and 2 different judges. But we found out taday that ya just need 2 different judges. So, since the club here is havin' 2 days of tests in August....me 'n Mom may be able ta get our Junior earthdog title this year.

I wanna tell ya my Mom goes ballistic when she gets ta the rats in that tunnel....ya can hear her barkin' way back in the line of doggies waitin' their turn...'n that just riles up the ones that are waitin' all the more. And ta think she didn't want ta go in the tunnel the first time we were there.....she started shakin' when we got close ta the practice site cause she remembered it from the last time 'n couldn't wait ta get to 'em.....That's my MOM !!!!!!

So what’s the test all about?
The Junior Earthdog Test consists of two parts;

To qualify ya have ta pass both parts of the test.

The junior earthdog tunnel is 9 by 9 inches and has an entrance at one end and the quarry (the rats) at the other end. It has ta be 30 feet long with three 90 degree turns and no additional entrances, exits or dead ends.

There is a release point that yer handler takes ya up to and at the judges command ya are released ta the ground. The handler does not pass the release point but may give a command at the release. Gram says “get the mouse” even though we are chasin’ rats cause we think everything in the vermin department is a mouse, except a snake…but I digress…...

Once yer released, ya have 30 seconds ta enter the tunnel and reach the quarry (again, the rats). If ya do that... ya pass that portion of the test….. Approach to the Quarry.

Ya then have 30 seconds ta start workin’ the quarry by diggin’ , barkin’ or growlin’ ta signal that ya really want ta get ‘em. Ya have ta do that fer 60 seconds. Then ya pass that part of the test…..Workin’ the Quarry. Ya then have ta be removed from the tunnel without destroyin’ it…there is an escape lid at the end that lifts up ta remove us wildly workin’ the quarry doggies. The judge will tell ya before ya leave if ya passed the test.

So now that ya have a bit of background on Earthdog, what do ya think? This is a really swell way fer doggie owners ta bond with their dogs ‘n a good way fer dogs ta feel that they can do somethin’ other than rippin’ up toys. Cause in the old days dogs were workers ‘n contributed ta the family just the same as their owners did. Now if yer worryin' about those rats....don't....cause they're in cages and there is a wooden dowel barrier at the end of the tunnel between where we are and where the rats are.

So, if it’s Sunday mornin’ ‘n yer reading this, we are at earthdog practice tryin’ ta hone our skills so we can pass the earthdog test that will be this August.

And the club that we have found ta teach us all this is the Western Pa. Earthdog Club or W.P.E.C. and their motto is Earthdogs do it with ratitude. Now their havin’ a fund raiser in the next month..... ‘n they were askin’ fer donations from everyone ta use fer a silent auction. They said ta go through yer attics ‘n basements ‘n ta bring flea market items fer them ta use fer the auction.

But Gram had an idea ta make some of her polymer clay doggies cause she figured that the members would really like ta see their dogs in an earthdog setting.... ‘n would buy ‘em ta get that money fer the club. 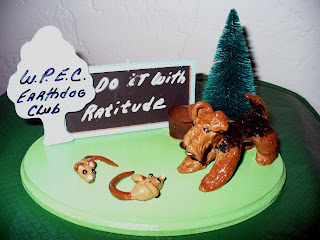 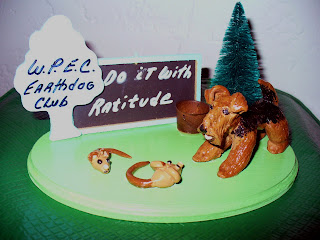 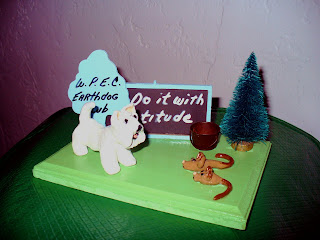 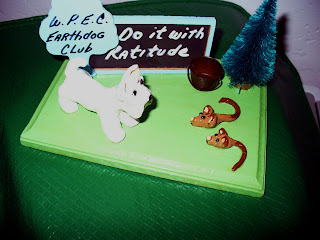 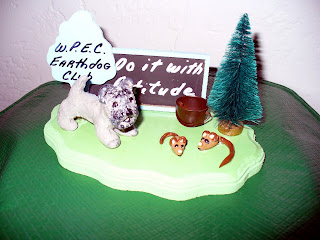 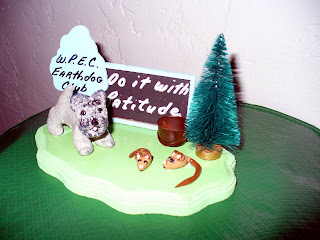 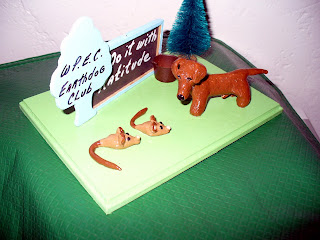 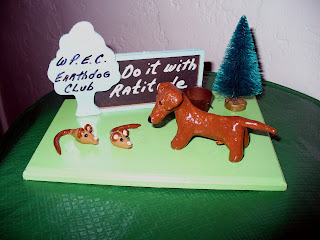 Gram usually makes wire fox terriers…can ya guess why ? But she tried ta make some of the breeds that we saw at the earthdog club practice ‘n meetings. They are ready ta box up fer the trip but she took a few pictures of what she made so ya could see ‘em. Can ya guess what breeds the little doggies are? There are 2 photo of each of the 4 creations.

They are not her best creations 'n the rats were a peck o trouble cause they needed ta be so small but all in all she is happy with 'em....'n it was good practice fer makin' different breeds in the future. Hope ya enjoy lookin' at 'em and we hope the club members like 'em too.

And we hope ya all are enjoyin' a restful Sunday.....

This is Dewey Dewster reportin' on the History of earthdog......

Posted by Dewey Dewster at 4:00 AM

It's Sunday Morning so you must be at your Earthdog Training....

Hope you are having fun...

Your Gram's clay doggies are really nice...I hope she sells alot of them & makes lots of money for the club...

This was a fantastic post:) The history of Earthdogs was awesome, and the models are fantastic! Your Gram is an artist!

Now, after looking the models, I am slightly worried! It seems that your Gram and Mercury have some kind of telepathic connection. The Dewey look-alike Oodget that we've been talking about - it's all about Ratitude! Really!

I don't want to spoil the surprise but I can't keep it all down either! So...well! Let me tell you. Of the two dog-clocks she's made so far, one is the Terrier clock with your look-alike! And he's got ratitude...In fact, the terriers and the rats in your Gram's models could've inspired Mercury...but the funny thing is, Mercury and your Gram have never met...!!

I don't understand this whole telepathy thing. It's downright spooky!

I am terri-fied:) I've let the secret out...she's going to re-earth me (I bet you didn't get that part - it's remotely connected to my recent post.)

Licks and Wags, and the very best for the Earthdog contest.

What a great post! We understand Earthdog a whole lot better now, Dewey Dewster!
We love your gram's clay dogs! They're just awesome!

Dewey my pal. While I'm typing this to you on Sunday afternoon you will be in your Sunday morning Earth Dog practise. Oh how I wish I could look into the past and see you doing it with RATITUDE. That was a pawsome post,Strange how a Daschound sneaked into thet list of Terrierific dogs huh? I understand what you are so worked up about now .... but got to say..(.quietly) just doesn't do it for me. Sigh. I take a half hearted interest to show willing sometimes. Hope you are not disappointed in me buddy???

Tell Gram she makes great models. They are sure to raise loads of money for the auction.

Thanks for all the info on earthdog. It looks like fun, but I'm not sure if that's for me, especially if you get dirty and have to have a bath after. Shudder.

Your gram's clay dogs are beautiful. We knew that she would not have any trouble with other breeds. When you got it, you got it!!

Hi Dewey!
Thanks for the lesson - I didn't know a lot about Earth Dog before! And your grandma's creations are pawesome! She will sell out quickly!
Love Clover xo

Oh brother we are shivering with excitement just READING THE POST!!!! And we learned something...we were not aware that you had to have 2 different clubs to get your JE!!!! We thought Agggie would get your "E" in August when she went again!! We are members of a club also but the practice is sooo far away we only get to go in the actual event...which WE CAN NOT WAIT FOR!!!!!!!!!! Hope you had fun today!! Archie and Agatha who is half of a J

I find this very interesting. What a great competition. It makes me ponder.....do you think there is an EarthCat competition? I can run really really fast and I am sure I could win in the EarthCat CATegory. Love your grandma's clay creations!
--JB

Your grandma's creations are so cute.. those are not little hammies right?

Do you think airedales could fit into the tunnels Dewey? I'd love to be an earthdog but I might get stuck which would worry me a bit.
Thanks for the history on earthdog.

Hey pals, I think that I'd get stuck in the tunnel, being a Substantial WFT and all!
Those clay dogs are simply pawsome! J x

Oh boy! That looks like fun. The closest I come to being an earthdog is occasionally chasing a mouse (and once, a RAT!) that's nosing around the trash cans on our late-night walk. I like the Cairn terrier that your Gram made! Did you know that Cairns with scarred up noses were a sign of honor? That meant they'd been in some scraps underground. And our tails are shaped like carrots to be easy to pull us out of holes! Hmmm, that doesn't sound comfortable. Maybe it's a good thing I'm a city dog.